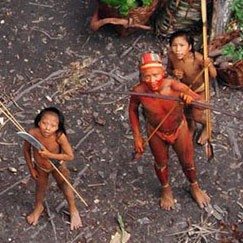 This week some amazing pictures and footage was released that shows uncontacted Indians on the Brazil-Peru border in never-seen-before detail. It is the first-ever aerial footage of an uncontacted community in the amazon.

The footage was filmed by the BBC in collaboration with the Brazilian government, for the new BBC 1 ‘Human Planet’ series (broadcast 3 Feb). The whole story can be found here.

The obvious question raised is how do we bring them the Gospel, and who will do it? Survival International is using this footage as part of their campaign to protect these natives and keep them uncontacted. While I am completely for protecting their rights and their land, how do we balance that with our Great Commission command to bring the gospel to every nation (ethnic people group)? We must obey God’s command, but there are many issues to consider if they are to be contacted, like diseases, loss of culture, language, etc. How will we reach them?

For more thoughts on reaching primitive tribal peoples and the problem with Survival International’s idealizing of primitive cultures, see our previous post.